Does the AR-15 have Writer’s Block? 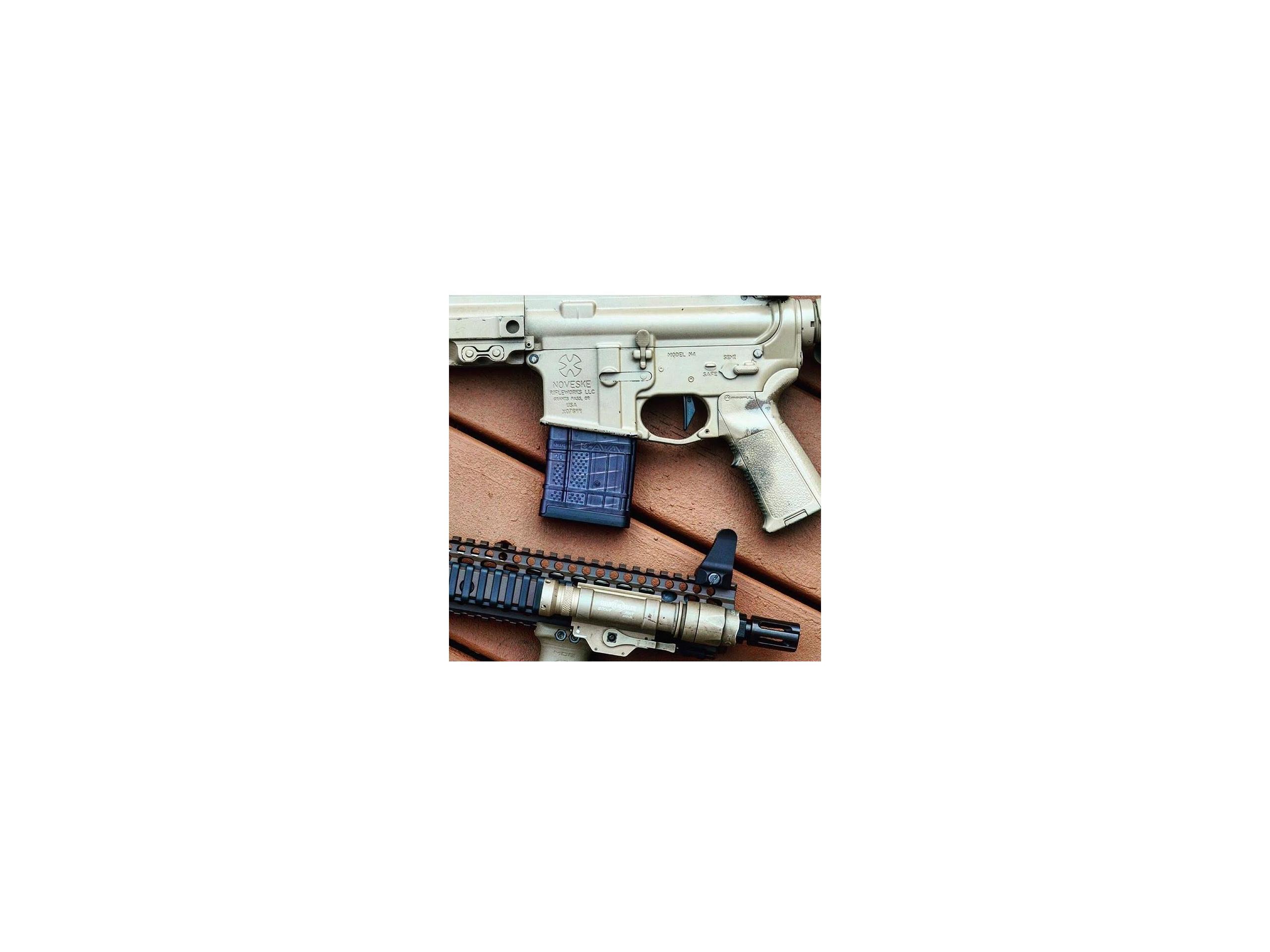 ar15 ar 15 .300 Blackout MLOK/Keymod
Posted in: News | Firearms Industry News, Articles - Fresh from the firearms industry
By Matthew Solis
No comments
I remember about 10 years ago building my first AR-15 off a Smith & Wesson M&P15 stripped lower. She was a Franken-build pieced out over a few months. It was a spiritual and mental adventure... It was my first big step of progressing my love for Firearms into something more tangible. Bear in mind, this was back when MAGPUL blew up. Chris Costa & Travis Haley were just at the beginning of their Rockstar fame, the word Dynamic started showing up more in our vocabulary. A Sea of Flat Dark Earth ran, voiding out the “Black” in America’s Black Rifle. This was however during the Inception of a particular Presidency, so prices were monumental. I remember paying $270.00 for that stripped lower, and that was a decent deal at the time. A far cry from 2017, where even Big Name manufacturers are cranking factory-complete built ARs with warranty for $479. There was an excitement to the AR-15 back then, it must have been a similar feeling when folks started Hot Rodding 32’ Fords for the first time. Innovation and curiosity ran rampant, amongst enthusiasts and manufacturers alike. Many people however, don’t seem to feel the same in 2017. They say the AR-15 is boring, dated, and has grown stagnant. With the influx of new piston rifles, AK variants, and Bull-pup designs coming are way, it seems manufacturers are thinking this way as well. Is the AR dead? I sat down with one of my Cousins the other day, a prior Army Ranger and we discussed that very question and what we personally felt were the 5 most impactful developments to the AR lineage and what brought life back into the platform over the years. Elements that either elevated it or made it exciting again.. at least to us and our respective circles. I will briefly touch on what I personally feel will be the next biggest developments to the AR-15 as well. Now bear in mind, what I list may be applicable to other platforms too, but for the intent of this article focus on the AR-15 with me. Ah yes, .300 Blackout… I have to applaud AAC for the development of this cartridge. There is much more going on here than just a Fat, Quiet .30cal cartridge going down range. So much so, that this round has gained NATO procurement and is currently being fielded by someone, somewhere in real world applications. The fact that really only a barrel swap is required to shoot the cartridge from your existing AR-15 is remarkable. It loves short barrels and loves to be suppressed. Combine that with decent accuracy, impressive ballistics, compatibility with nearly all AR-15 components – winner, winner Chicken dinner. This round alone made the AR-15 relevant again and will continue to do so as the cartridge becomes more popular and proven. The Rise of NFA item ownership

People by the masses began to take the NFA plunge, and saw the reward was worth the “labor.” So much so, that Suppressor ownership numbers have most likely surpassed the 1,000,000 mark as of April 2017. The popularity of .300 Blackout shortened upper receivers mated to your registered SBR lower is a no brainer. Slap on your .30 caliber can and go to work. As these items become more popular, and the masses become less intimidated by the procurement process and ownership of them. They will eventually become mainstays in Gun collections across America. I have recently enjoyed a few of my Cans and SBRs being released from NFA jail, and no matter how long the wait for approval is, it’s eternally worth it! If only the HPA passes… fingers crossed. Until then keep buying silencers, and Form 1’ing those lowers!

Hate it or love it, it essentially created a whole new Weapon System. What was originally designed as a shooting aid, blossomed into something far more important than ever imagined. So much so that it continues to confuse the already very confused BATFE. And as companies like SB Tactical, continue to refine and hone the design, more and more people will build AR pistols. The brace has grown on me, and if you see some of the more recent PDW and B&T style braces coming out to, you would gladly cheek those babies as well. They are beautiful, and not a bad way to wait for a form approval or have a smaller more compact package to ride around with. Especially if you travel a lot, and don’t want to have to deal with ATF every time you leave your home state. Embrace the Brace! Yes, the Clone wars and #MasterRaces. There is nothing quite like a $10k MK18 SBR clone build to really annoy your friends or significant other. If you’re not familiar with the Rattlecan sea of Block this, Block that, Mark that, MOD this on Instagram.. I’ll break it down for you quickly. Certain AR-15 end users will essentially clone or copy a specific M4/M16/AR-15 variant currently used or with prior use by a specific Military branch in a specific theater of War, set to a Specific time frame. As an avid World and Military History enthusiast, anytime you can own a weapon with specific Military applications, it’s a cool feeling. My cousin and I agree that it’s essentially the VIP club of AR-15 ownership currently, upper Echelon stuff.  All the cool kids with deep pockets are doing it. As most will find it difficult to pull the trigger on a PEQ-15, $2500 Elcan, or matching NODs all in one swipe of our debit card. But no hate on this end, the amount of effort and attention to detail that goes into sourcing some of the components to finish a proper build is amazing. The Block stuff gives AR-15 builders something to shoot for. They’re done racing their VW Golf and are ready for the Porsche 911 GT3-RS.  And as Hollywood, and the Social Media Gun Porn indulges us, more & more Block clones will see the Light of Day. And that’s fine by me. I want you to think first on how long 1913 ran the game. It took a very long time for a new system to surpass it in popularity and rival it in use. With the arrival of these two new systems, the AR-15 began to take on new shapes and sizes. They began to look more futuristic more simplified & organic, also most importantly: more functional. The ability to index accessories in a user specific fashion, all while saving weight… truly elevated the AR design. These two systems truly evolved the AR-15 and will continue to do so, until something better comes out. And yes I prefer MLOK, as to me it’s sleeker looking. But admittedly BCM’s KMR is still an excellent design. As a sucker for Aesthetics both of these interfaces made ARs sexier than ever to me. Don’t get me wrong, a classic CAR-15 a la “Heat” or an A1 Vietnam Era.. well those are timeless. But some of the current rigs showing up on Social Media feeds now a days, are simply stunning. Truly, functional Art. So does the AR-15 have Writer’s Block?

No. Hell No. As a matter of fact you the consumer, decide what the next chapter holds. I personally see the following coming into play at some point for us. The implementation of Electronics into the AR-15. You’ve been seeing this more and more in Optics, and now there is even “Binary” triggers. You have to admit though, being able to adjust trigger pull or dynamics with Electronic precision is kind of cool Maybe even on a small little touchpad or LCD screen embedded to your receiver and fire control group. Someone is developing this as you read this, I guarantee it. Super Modular Accessories, and what I mean by that is imagine a Buttstock that can go from CQB to Precision DMR, by the swap of a few pins or notches. The end user would save money from having to buy a new stock every time they want to build and rebuild their rifle. No more part bins of leftover stocks from your builds of yesterday. You’d have one stock to rule them all.  Carry this concept over to rail interfaces. The ability to swap out chunks of rail to customize your rig to your needs. Think quick detach rail. Refined Bolt Action AR-15 uppers. With the popularity of precision and long range shooting, some manufacturers are going to jump into this. Instead of having to build out a bolt gun, you could have a precision bolt action upper mated to your AR-15 lower. I know some companies have played around with this idea, but I don’t feel anyone has executed to the degree it could potentially achieve. I’m curious, what do you think will be the next advancement to the AR-15? Let me know in the comments below. – Matt