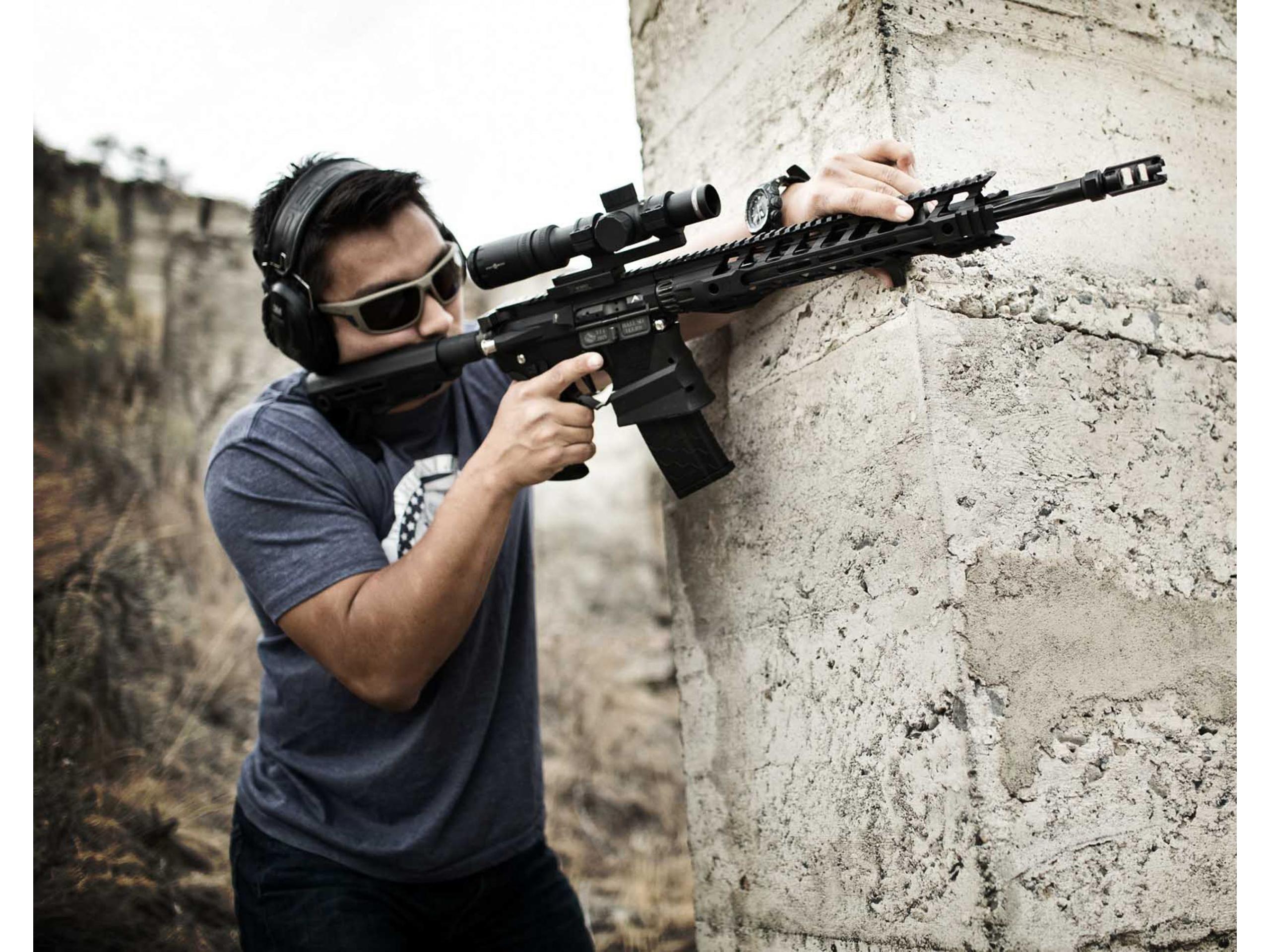 Low Mass:  Worth It?

In my previous entries, I have covered muzzle devices and adjustable gas systems.  Now it’s time to address the final piece of the (hardware) puzzle, the reciprocating system.  This entails the Bolt Carrier Group (BCG), the buffer, and the buffer spring. Along with the recoil any firearm experiences from the Newtonian “Equal and Opposite” force from the projectile being accelerated forward (pushing the firearm rearward), much of what an AR-15 shooter experiences as “recoil” is the BCG/buffer impacting the rear of the extension/buffer tube, then slamming forward as it chambers the successive round.  In the adjustable gas post, I discussed limiting gas flow to reduce the rearward velocity to mitigate that impact, but there is more to the story.

As mentioned previously, two of the events one feels in recoil are impacts involving the BCG.  Therefore, by reducing the mass of the BCG, we will reduce the momentum, which reduces the felt impact at both ends of the cycle.  *Note: This must be combined with an adjustable gas system, or else by reducing mass you will increase velocity, which is not advisable*

Low Mass BCG’s are available from a wide variety of vendors, in a wide variety of weights.  One can find them in steel, aluminum, and titanium, and thoughts vary widely on which is best.  Typically steel weighs a bit more, while the aluminum and titanium versions can get extremely light.  If running aluminum, keep in mind that you ultimately have aluminum rubbing aluminum, so to prevent galling/stickiness it is important to find a carrier that has a really good coating, and to run that thing WET!  John Paul (JP, of JP rifles) has been quoted in reference to their aluminum offering saying “If you don’t have oil spraying on your shooting glasses, you need more oil.” Titanium is treated similarly to aluminum…  I’m not sure the galling risk is quite on par with aluminum, but they should be treated the same. Also note: titanium and aluminum carriers are advertised as “race gun” parts. The manufacturers will typically not recommend them for duty or defensive weapons, and their life-span will be diminished.  They are often advertised as a “10,000 round” part; some people report much longer life-spans, others less.

For me, a competitive shooter, the allure of these race-gun parts is high.  I have had mixed results, though. In my personal rifles, I had one build that ran an aluminum carrier flawlessly, and I had one that just couldn’t get to the point of reliability I needed with an aluminum carrier, even testing multiple carriers.  I was running the same gas system, same barrel length, same buffer system as the one that ran, so it was likely an issue in the tolerances somewhere. I will say that a high quality carrier seems to have a better coating on it than some of the less expensive aluminum carriers, which helps both in function and durability, but my personal philosophy has moved to getting a high quality, low mass steel carrier as they are easier to tune and trust.  With a good coating (nitride, DLC, etc.) they run quite smoothly, and their weight increase from aluminum is not enough to feel like I’m leaving performance on the table, yet they are noticeably softer-shooting than a full mass carrier.

Along with the bolt carrier, the buffer and spring play an integral role in the reciprocating system.  With the gas system adjusted, we can do away with all the heavy (H/H2/H3) buffers, which would be silly if we’ve gone with a low mass carrier, anyway.  One method my competition brethren use is to empty a standard buffer of its weight or source a polymer/delrin buffer, and get one of any number of aftermarket buffer springs.  The springs are often polished, flat wire, etc. If going this route, I would recommend trying one that is actually reduced power, for reasons I’ll explain shortly.

Another alternative, and probably the most popular option amongst my peer group of gear-chasers, is the JP Silent Capture Spring (SCS).  I try not to push any particular brand too often in these hopefully informative posts, but this really is a well-designed system. They are adjustable, with replacement springs of various strengths, and the metal rings can be interchanged between steel and tungsten to adjust the weight if needed.  They do eliminate the “SPROINGGG” sound associated with the classic AR as advertised in the name, but more importantly they just run smoother. One of my favorite aspects is the spring-pack. As alluded to previously, I think most people running a low mass BCG will find benefit to the lighter springs.  The reason for the lighter spring is that it solves multiple issues by decreasing the velocity of the BCG returning to battery: The felt impact is lessened which makes the gun feel flatter/softer, and it also reduces carrier bounce.

Carrier bounce typically comes from the BCG slamming home hard enough that some of that energy “bounces” the carrier back to the rear, often enough that when the hammer falls next it can’t reach the firing pin.  This is one reason behind the heavy buffers and BCG’s in a more “traditional” system, is that it takes more energy to make the heavier system “bounce.” However, we can reduce the weight of this system, and reduce that BCG velocity through less spring pressure.  All the shooter really needs is enough spring to strip the next round out of the magazine, and the carrier won’t slam forward with enough energy to cause the carrier to bounce.

Please remember that when tuning an AR-15 to shoot soft/flat, you are working with a system in which everything works in concert.  If you make a seemingly small change to this system, it may knock it out of balance and need to be re-adjusted. When properly tuned, this system can be as reliable as any over-gassed, extra mass rifle out there, but this is an undertaking that should be tackled with eyes wide open.

Have fun, shoot straight, be safe!

ar 15 Reciprocating Hammer
by Nathan Lindeman
Posted in: How to | Firearms how to's
0 comments
Comments
Leave your comment
Your email address will not be published