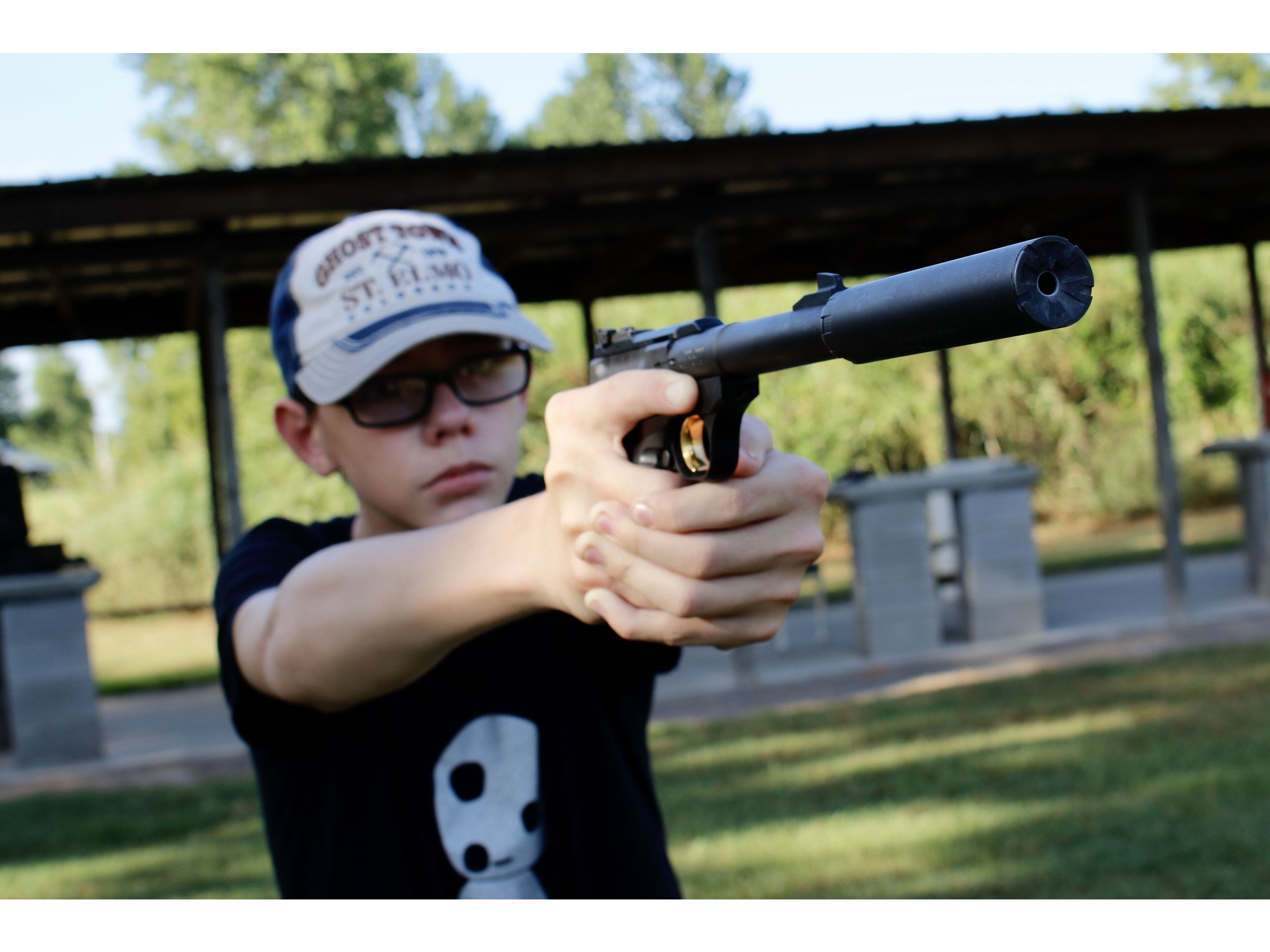 The SilencerCo Sparrow is more than just a 22lr suppressor. It's a gateway accessory, and here's why: the single biggest tool available for teaching shooting skills is a suppressor. Hands down, the edge that a good silencer can take off of any round will make the experience much less intimidating. Take minute to read my SilencerCo Sparrow review and you'll see why I make that claim. 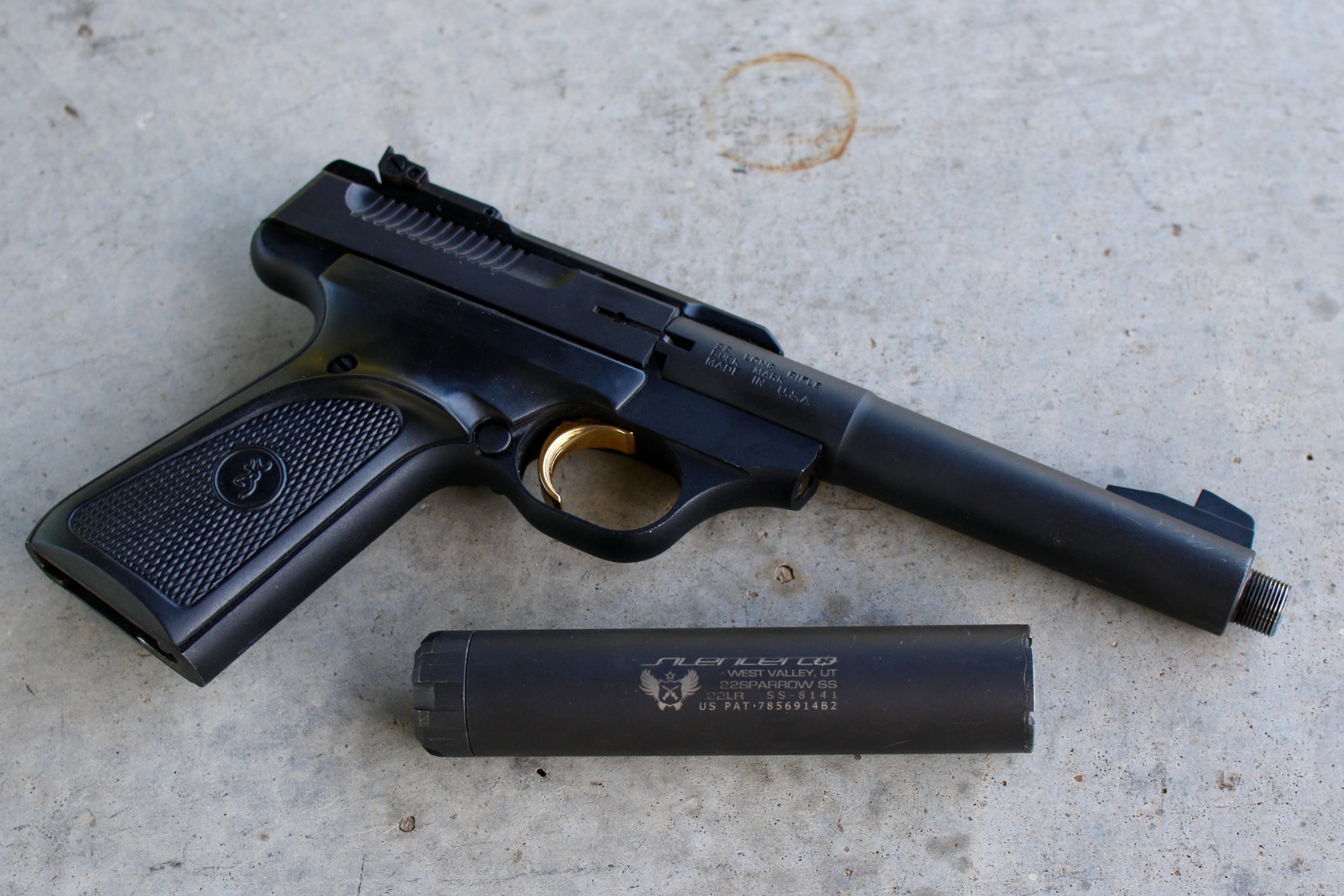 I learned this lesson the hard way. As a diehard shooter, I assumed anyone who wanted to learn to shoot would accept some ear-ringing. Whenever I’d take a new shooter to the range, I’d talk to them about the importance of hearing protection and hand them my biggest set of muffs.

This is a silly approach, if only because the tension in some hearing protection—if you have never experienced it—can be distracting. Most shooters get used to something in our ears, or squeezing our brains out, or both. 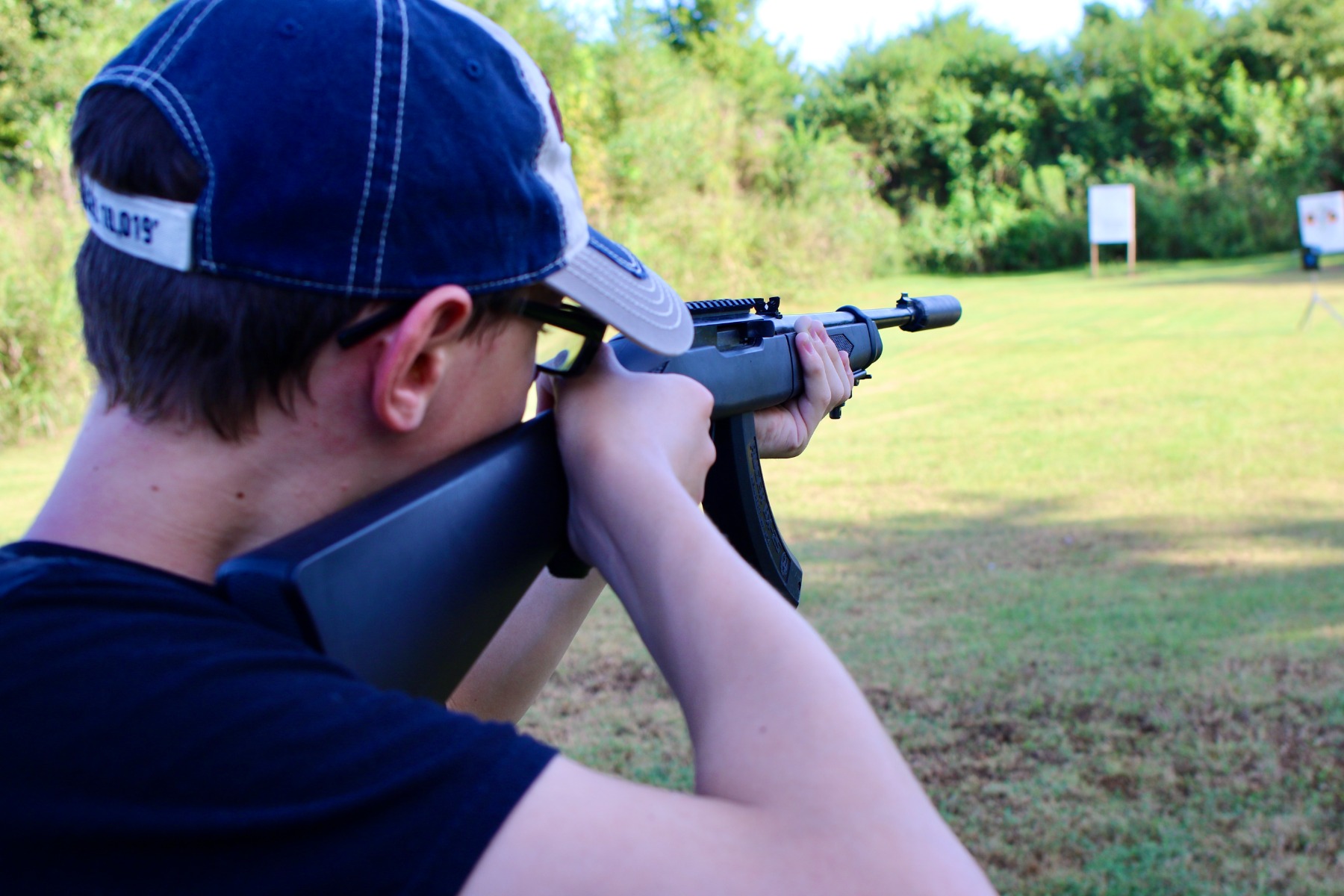 Silencerco Sparrow review: this is an excellent silencer, not leas because the use of any kind

of suppressor will make it easier to teach and more likely for a student retains information.

Then comes the challenge of trying to talk to the shooter while they’re wearing hearing protection, or them trying to ask questions of you. The constant shifting can be distracting and cumbersome.

For most of my new-shooter instruction and all the work I do with kids, I begin with a SilencerCo Sparrow. This can threads easily on pistols and rifles and will dampen the crack of standard .22 LR ammo to the point that you don’t need hearing protection. 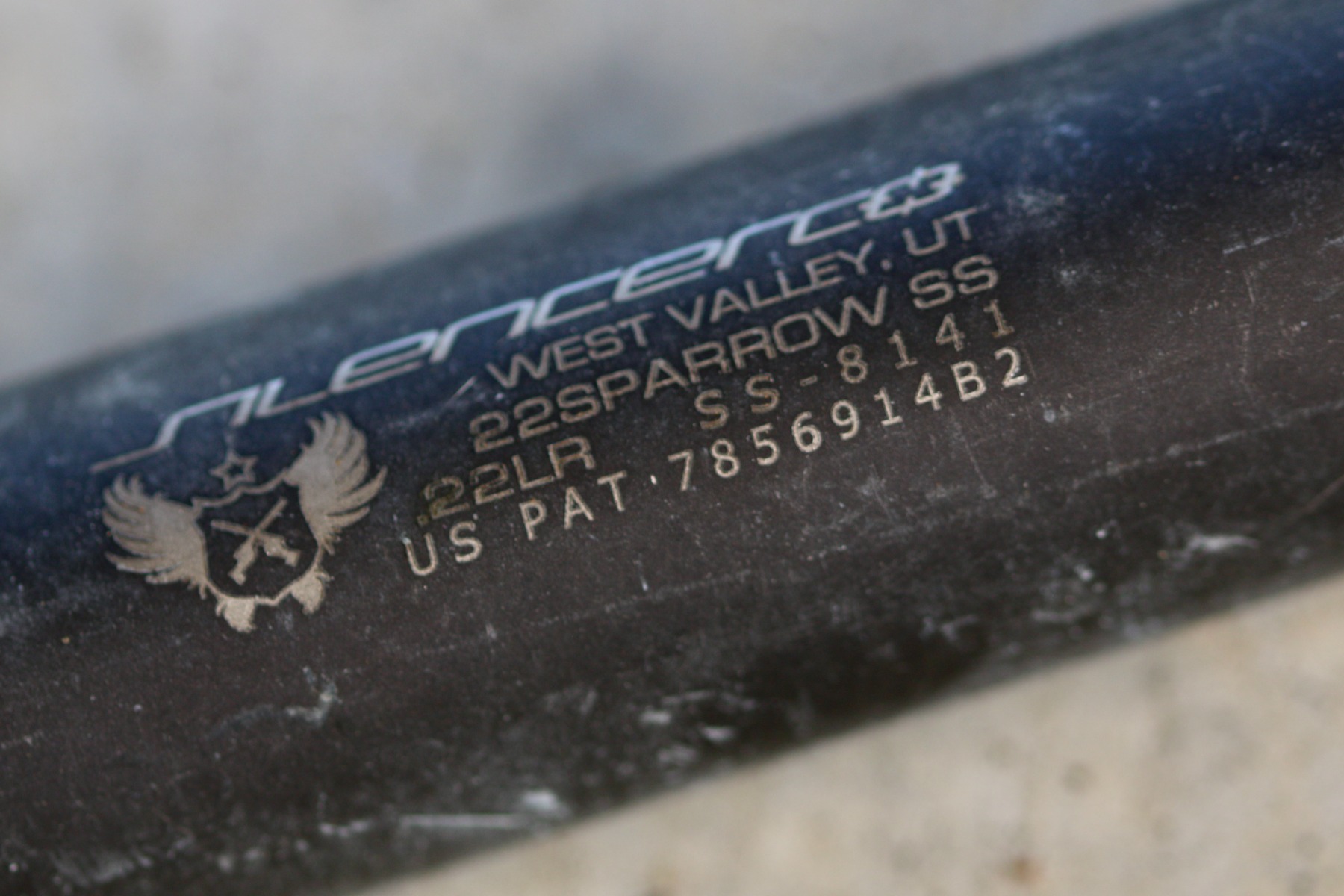 Lately, as ammo has become more precious, I’ve been asking kids to wear active hearing protection, too. That’s more of an fail-safe than anything. Some .22 LR, even from a rifle-length gun, will produce a sonic crack. The pop remains hearing safe, but it is still loud. 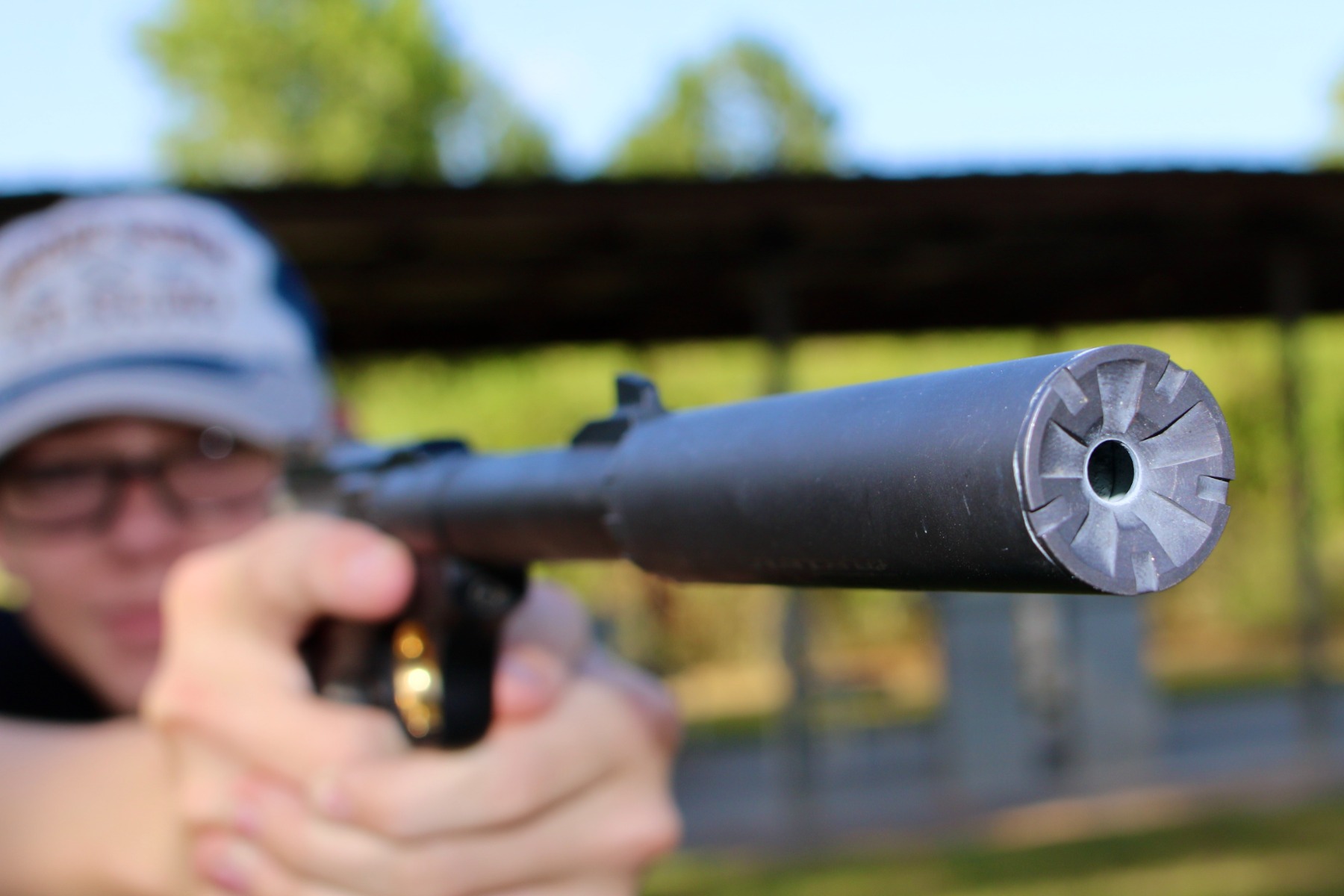 Using a 22lr suppressor (or any caliber really) to help instruct new shooters is a good idea. 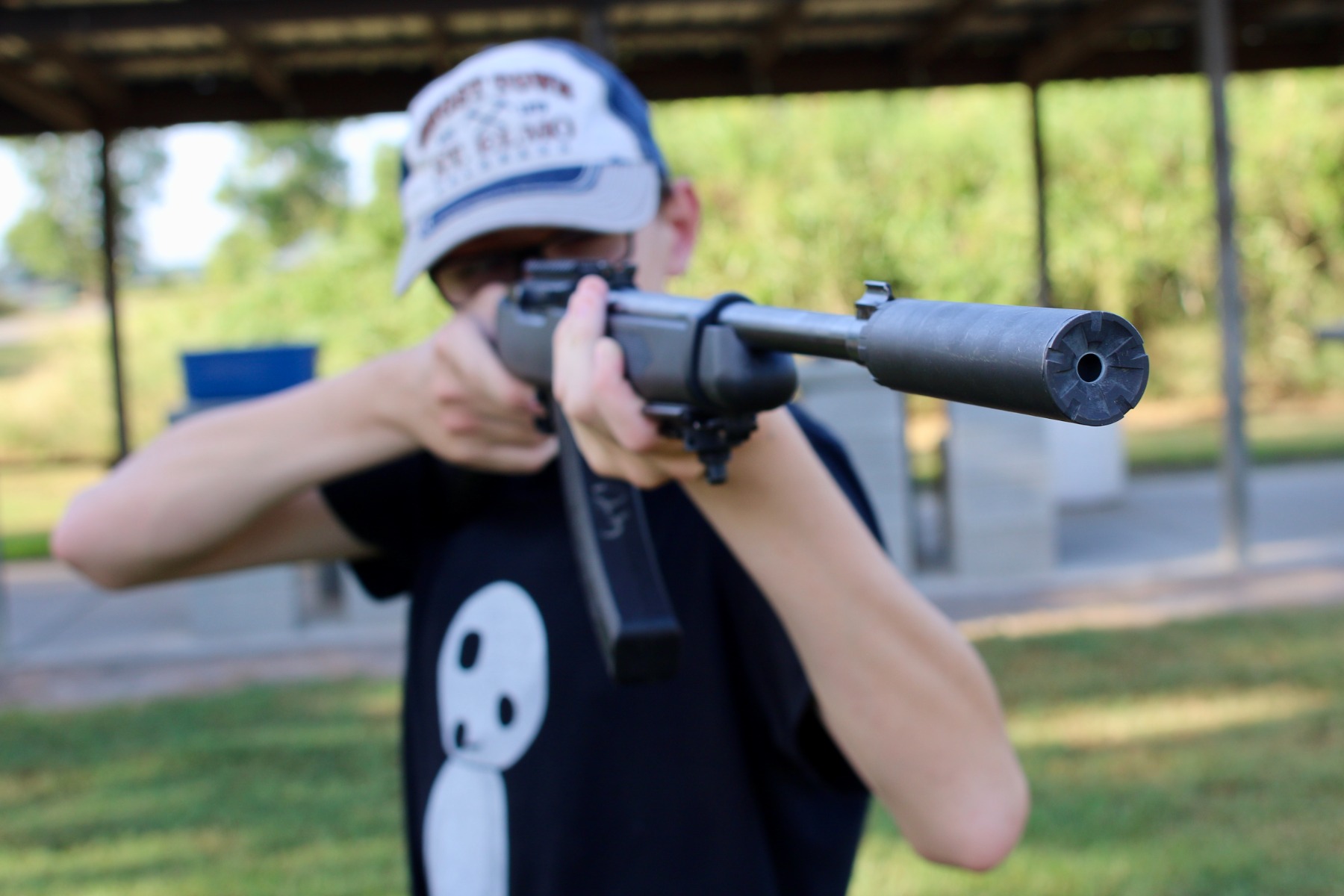 The SilencerCo Sparrow 22lr suppressor will work on both rifles and pistols.

It is this kind of protection that makes the effort safe, but there’s another angle to making the practice rewarding from an educational perspective. That’s comes from making the right kind of noise.

The last element that I use is a simple reactive target. I prefer steel. And, truth be told, I like to have several sizes of steel targets. 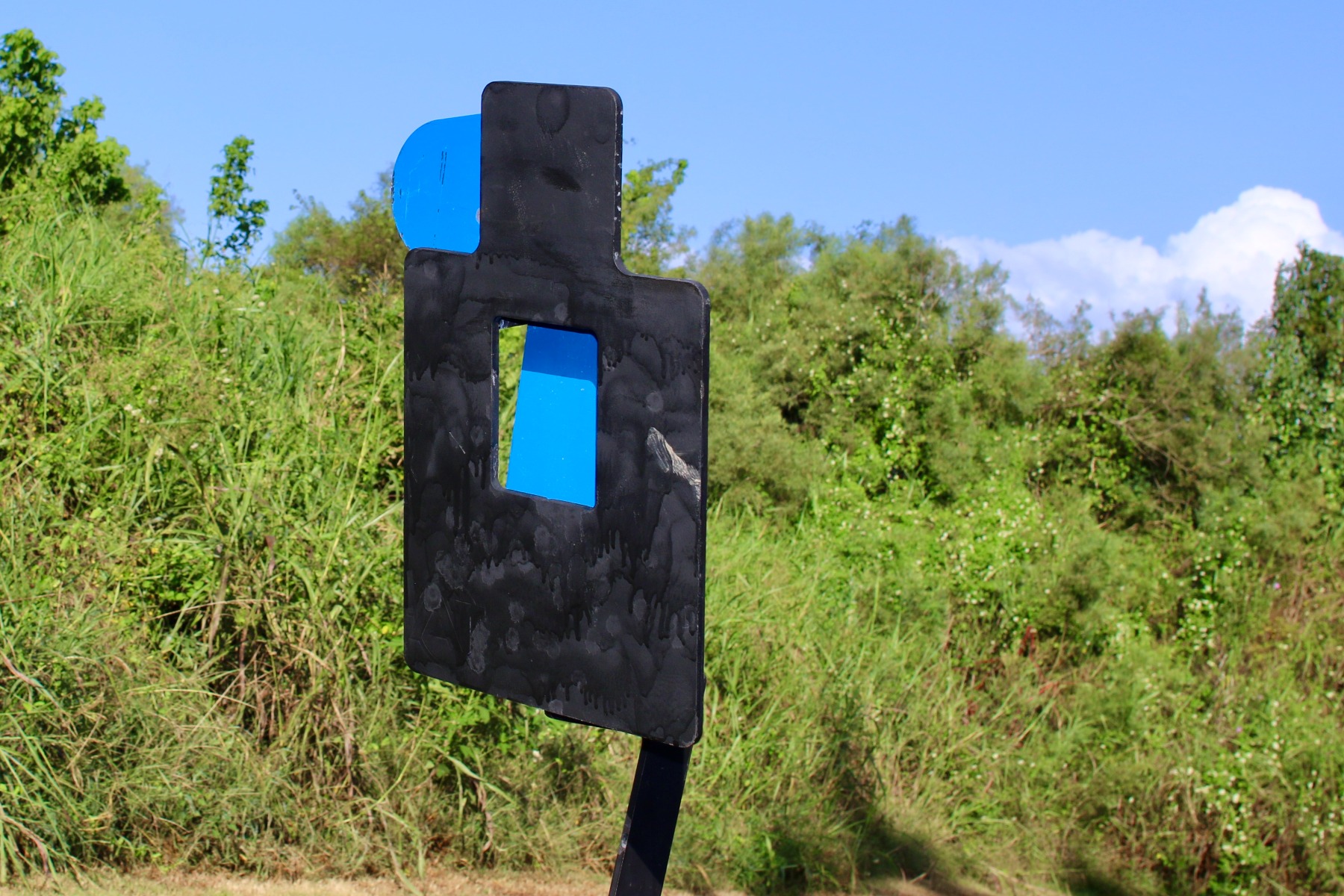 Reactive targets are another range aid - immediate hit-or-miss feedback can be a huge benefit.

Once, I was working with a very reluctant new shooter who had a serious aversion to loud noises. She’d fired a gun once. Only once. That was enough for her.

I was working with her son, though, so she’d stuck around at the range to handle any kind of parenting needs that might have arisen with her six-year-old’s first experience with marksmanship.

As we reloaded the magazine, I talked to him about more advanced safety considerations and more of the features of the gun. We talked about guns in movies and video games and how he should and could stay safe around guns away from the range and at his friends’ houses.

The conversation was easy because I hadn’t scared the kid with the heavy recoil of a heavier rifle or the loud report of the gunshot. And I could tell his mother was listening, too.

Is the Sparrow 22 the best rimfire suppressor available? If not it's right there at the top.

“You think your mom could hit the target?” I asked the boy.

It was a ploy, of course, but I’d been trying to convince her that shooting was fun for years. Now her son was in on the effort, and there was no way she would tell him no.

She was much more apprehensive than he was. I repeated all of my safety concerns as she got settled behind the rifle. When she pulled the trigger, she squeezed her eyes shut tight, like she’d expected the gun to knock her down.

That first round didn’t connect, though, which made that boy even happier than he’d already been and he jumped to her side for some hardcore coaching.

And there it is. No need to go down-range to check a target. You can hear when you miss. 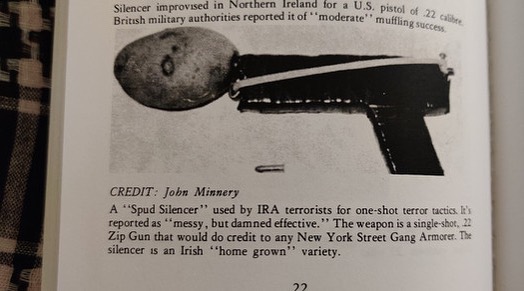 Silencers are a great training aid. And while the SilencerCo Sparrow may be a little

more expensive than something "handmade", it's going to perform a lot better...

Is it the best 22 Suppressor?

Is the Sparrow the best 22 suppressor available? I wouldn't go that far, but it is definitely at the top end, and it's economical too.

SilencerCo’s Sparrow is my go-to teaching tool, but there are other benefits. I hunt whitetail in the South and will often hunt squirrels on my way out of the woods in the morning. The Sparrow on a Browning Buckmark is a great pairing.

The Sparrow is a narrow can—just over an inch wide. This means you won’t have to have tall sights on most rimfire pistols or rifles. You should be able to still see the top of a front sight over its front edge. 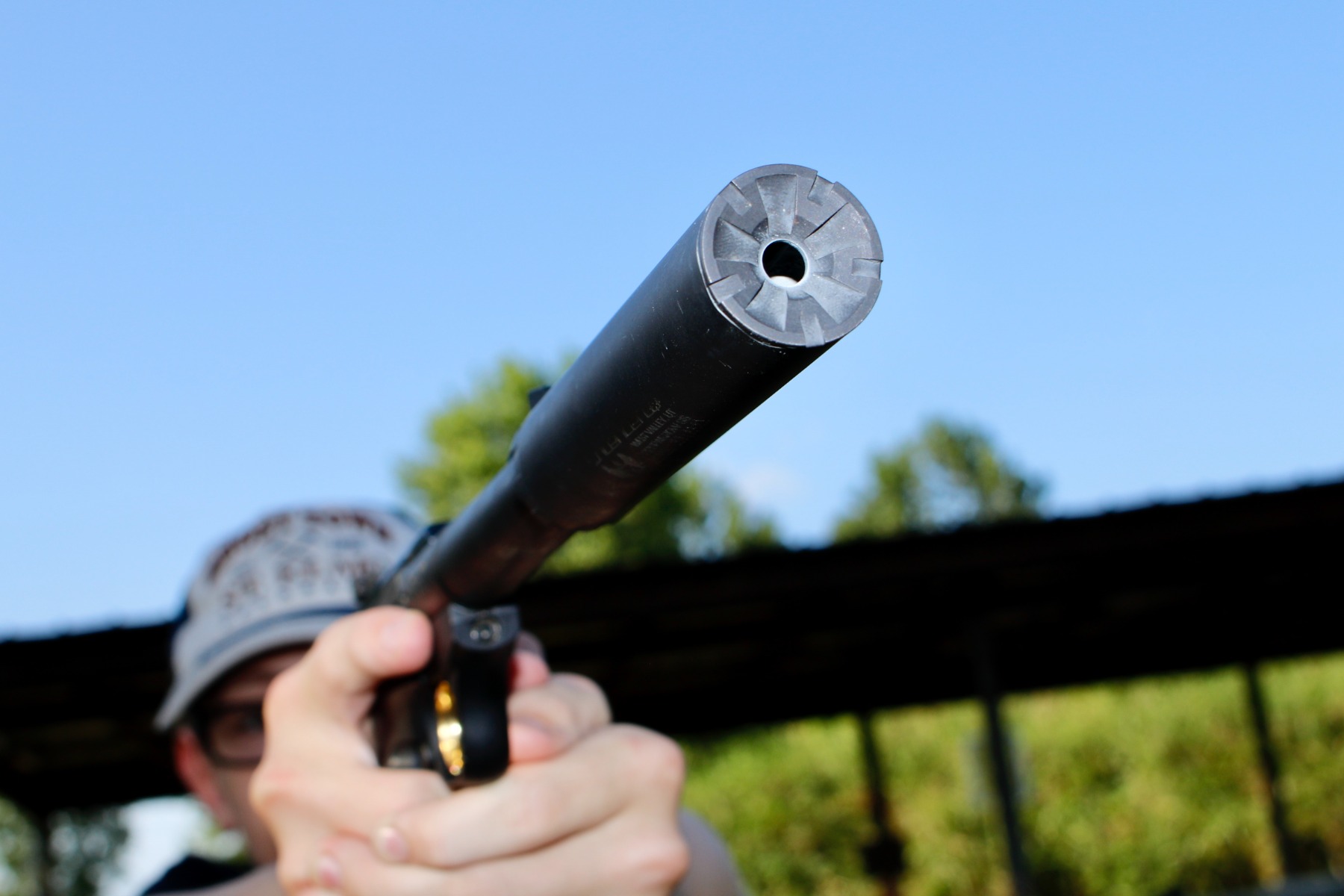 The can is user-serviceable, too. Inside the outer sleeve is a set of stainless-steel liners and the baffles. The Sparrow comprises five parts that can be brushed clean after a range session. 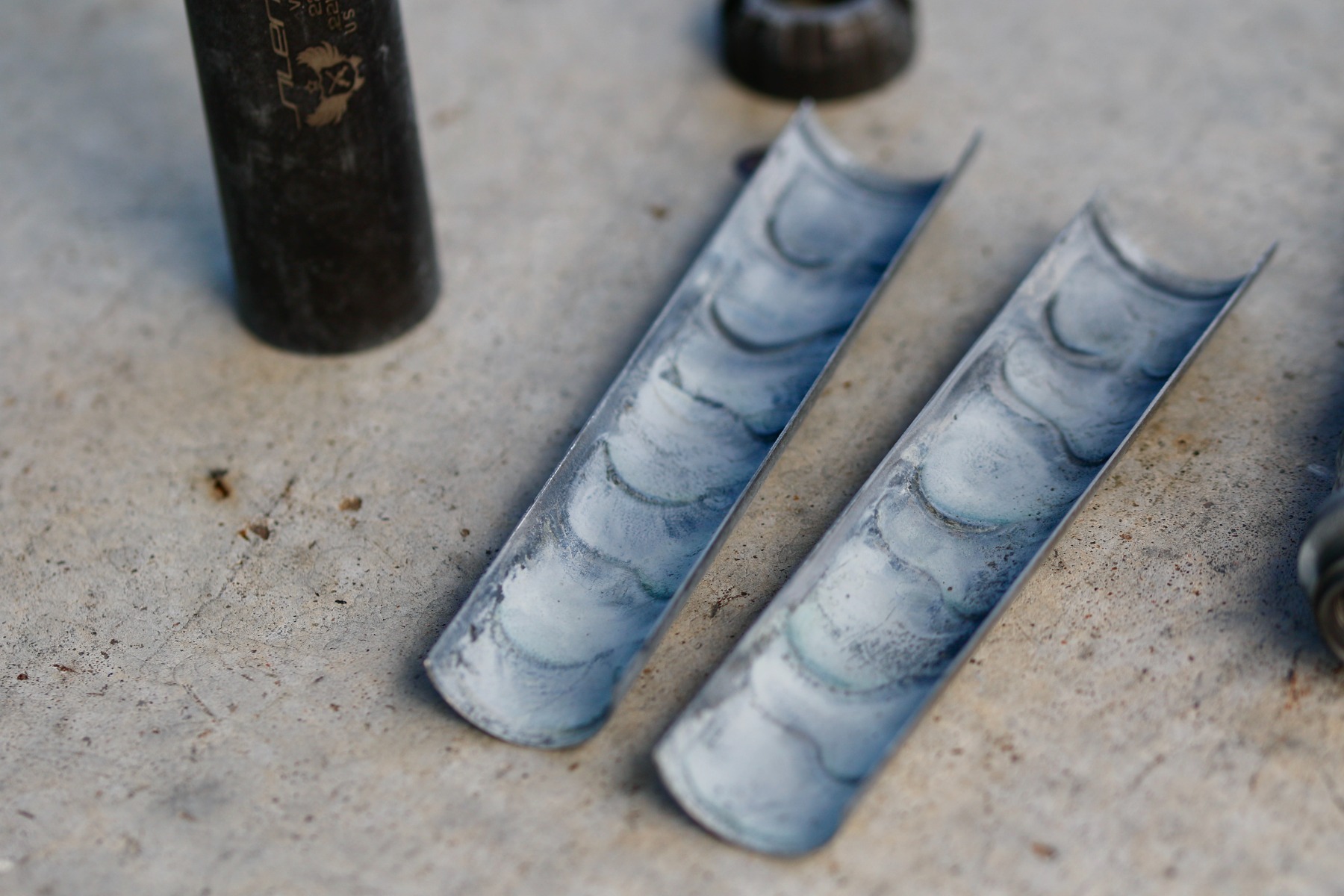 Or, if you’re anything like me, you can go for much longer periods of time without cleaning. I regularly work with a couple of Scout troops and those kids will run through 6,000 or so rounds in a weekend. By the end, the Sparrow will need some attention.

Even then, though, it is just a matter of opening up the can and brushing and soaking. The lead deposits inside are mixed with the fouling from the .22 LR rounds and can be aggressive. Wear a mask and glove so you don’t breathe in any of the dust that you brush or scrape out. 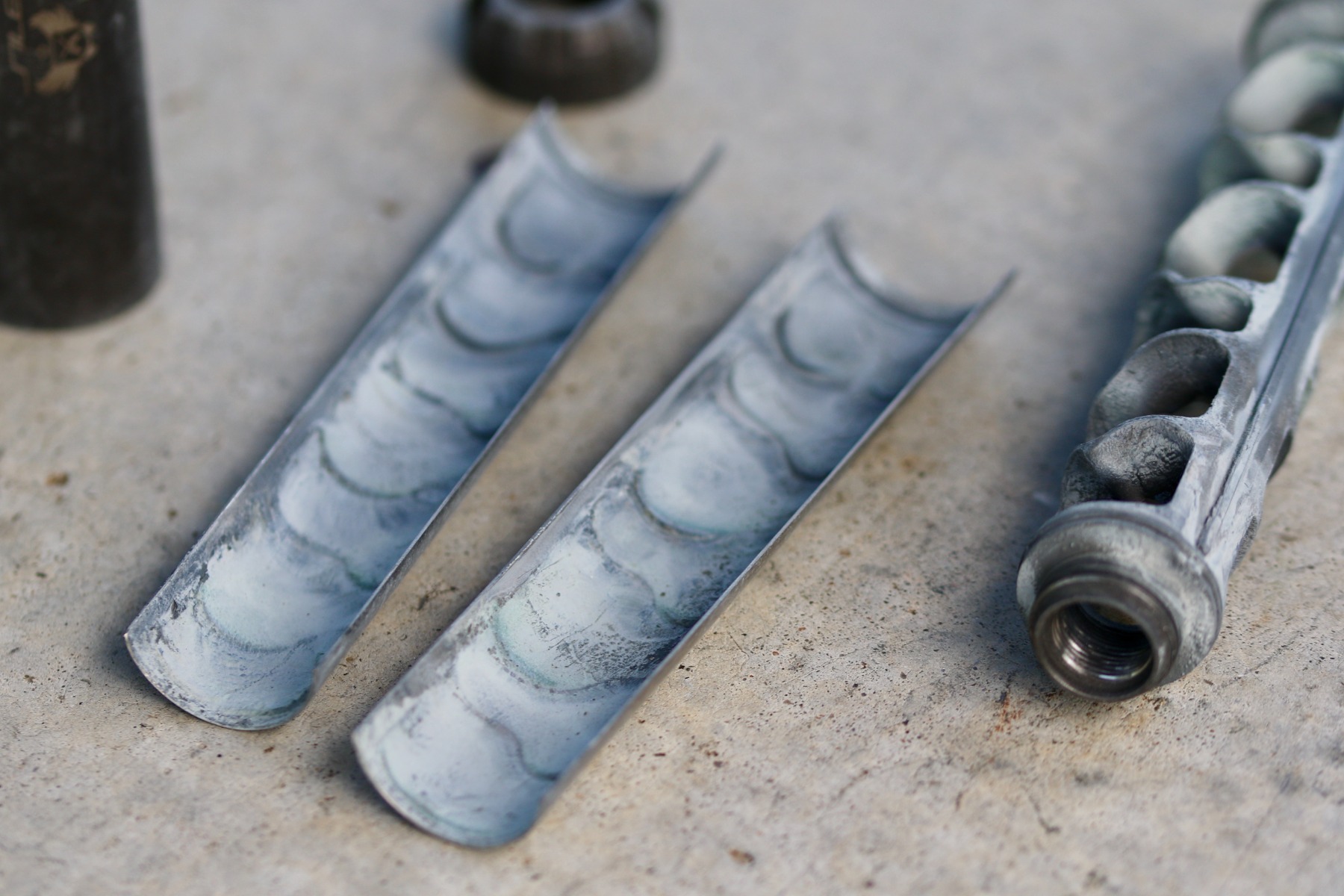 This Sparrow here has been in circulation for almost a decade. I’ve got no real estimate of its round count, but that hardly matters. I can guarantee it has seen at least 50,000 rounds through it, but it could be more. 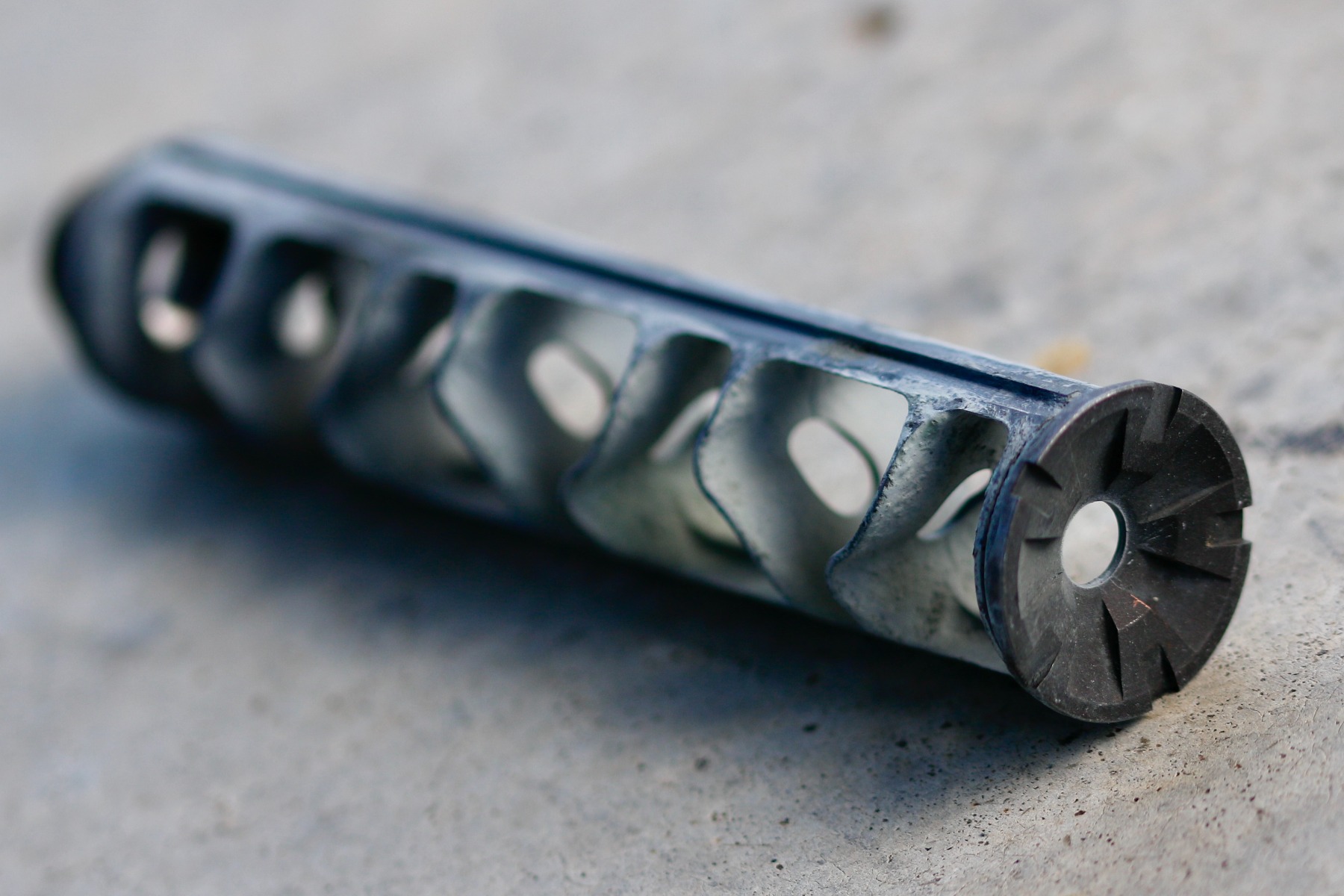 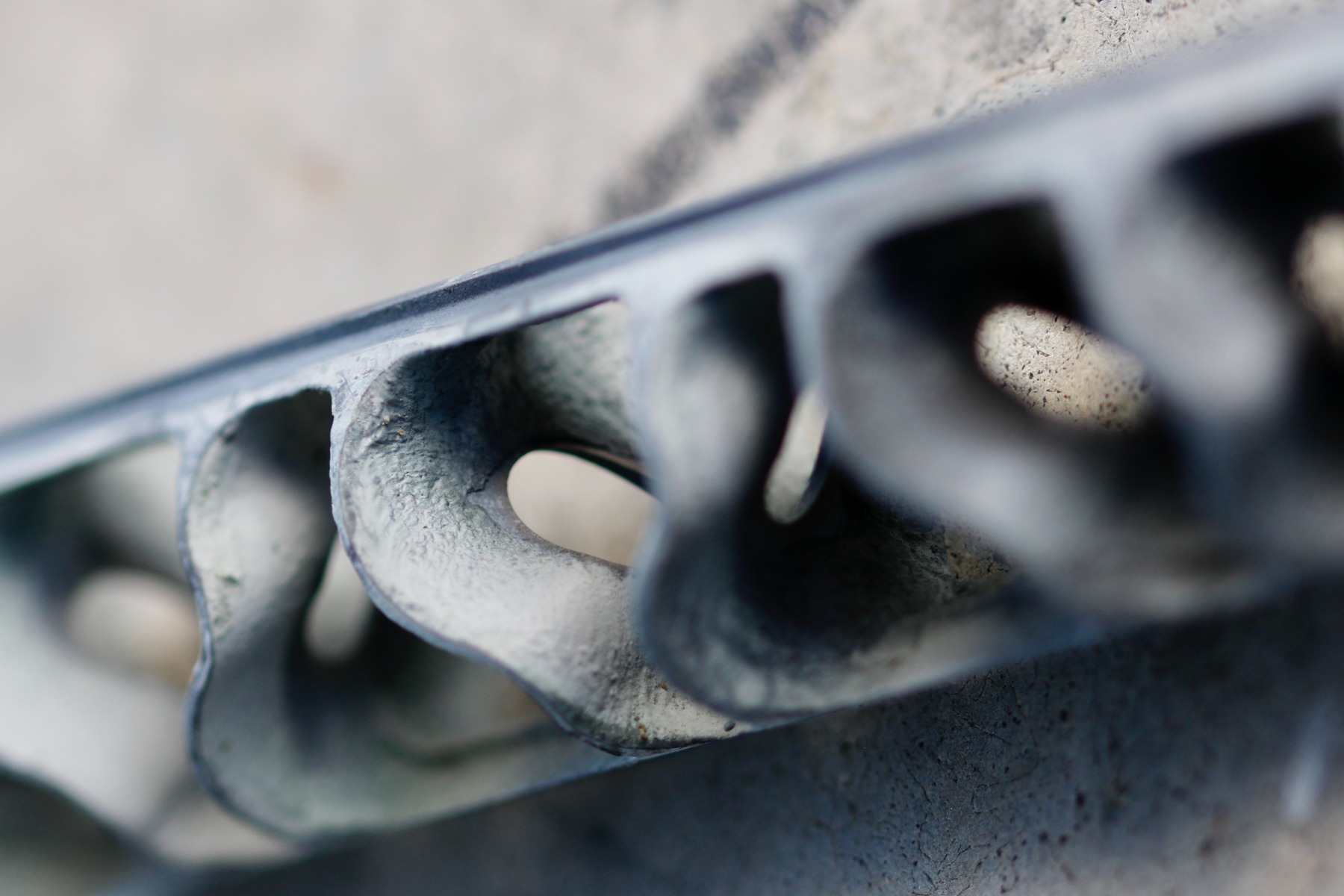 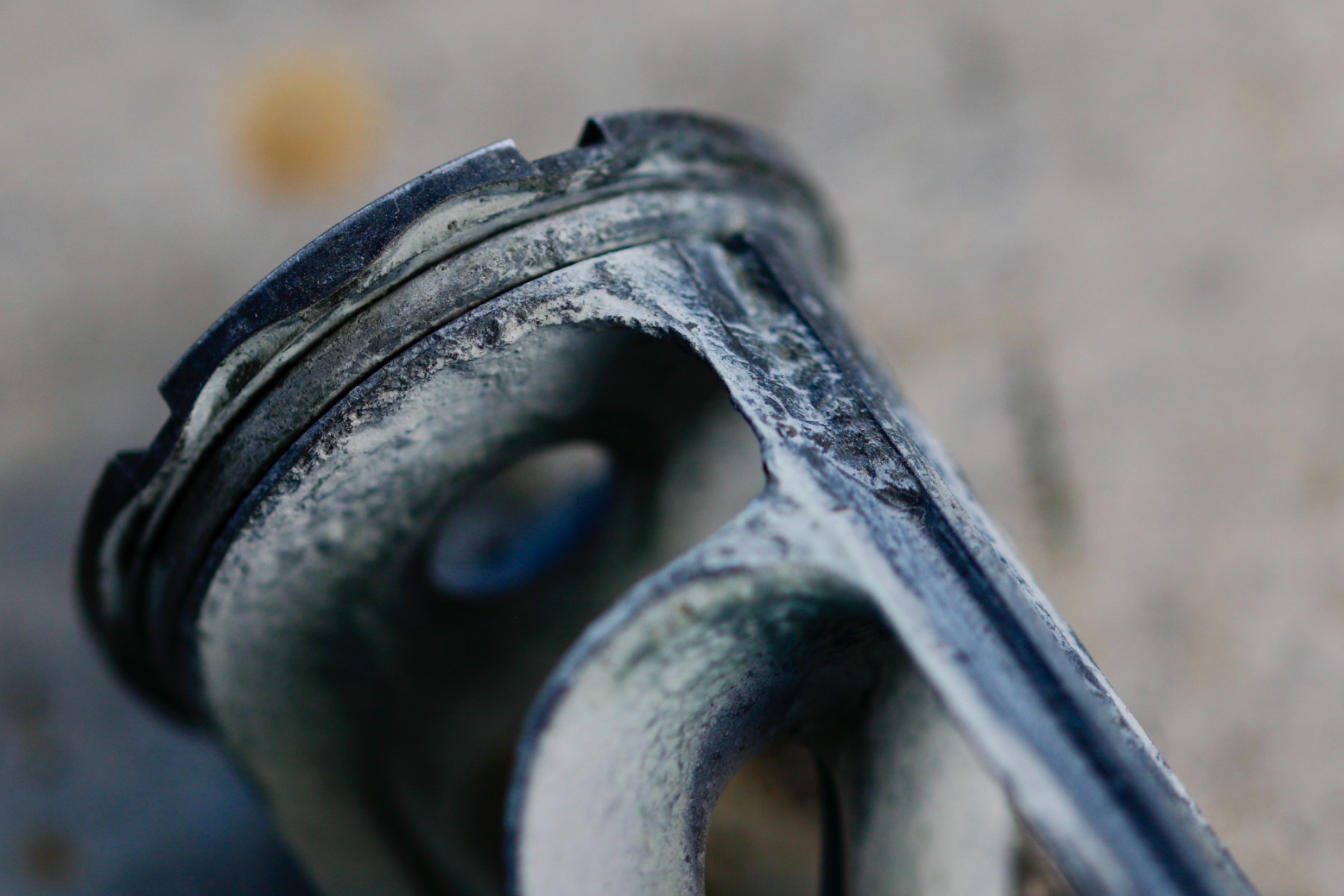 Something to think about

There is one more thing to consider. The benefits of a good silencer are priceless, but the Sparrow isn’t. The SilencerCo Sparrow is listed for less than $400. That’s a steal for what you get. There’s a $200 tax stamp, too—but that puts your total price somewhere in the neighborhood of $600.

If you don’t already have one, establish a trust. You don’t have to have one, but a trust will make passing this on — memento more — much easier.

A trust will help you with future purchases, too. Just at the suppressed rimfire is a gateway gun for new shooters into bigger, louder calibers; this can will show you why most of us don’t own just one. 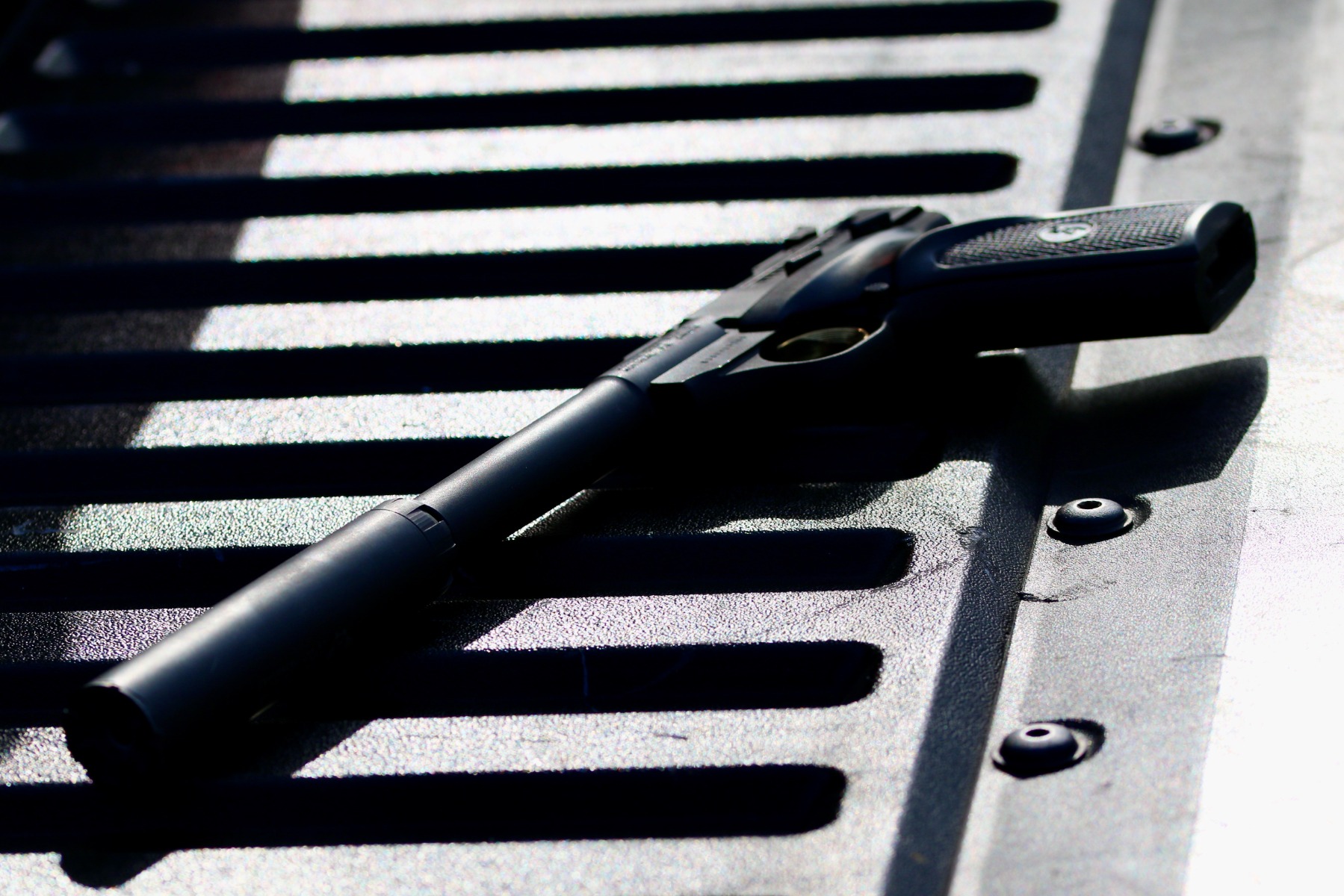 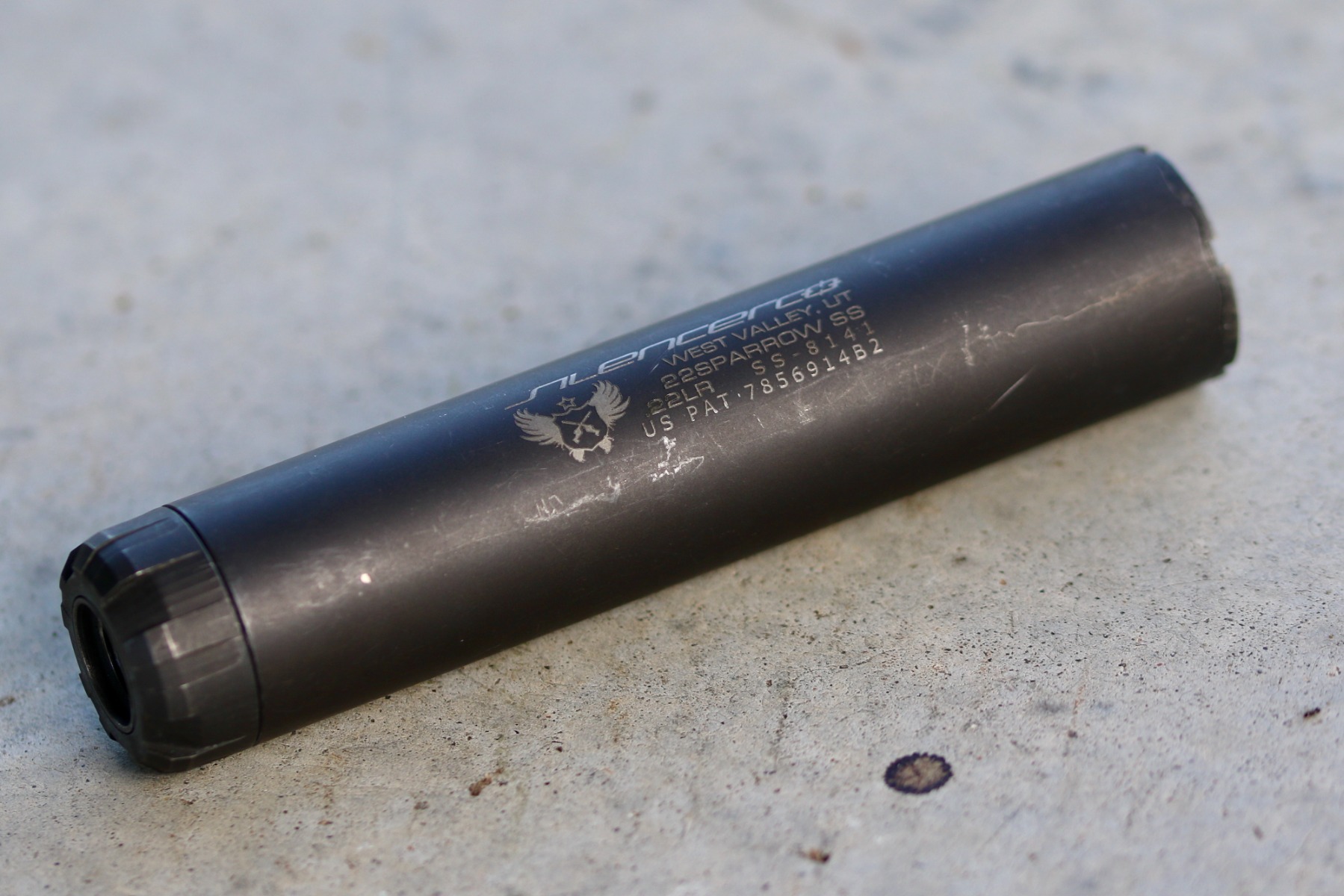 The Sparrow 22 is full-auto rated and capable of reducing the sound signature of the following calibers:

Learn more in their video.