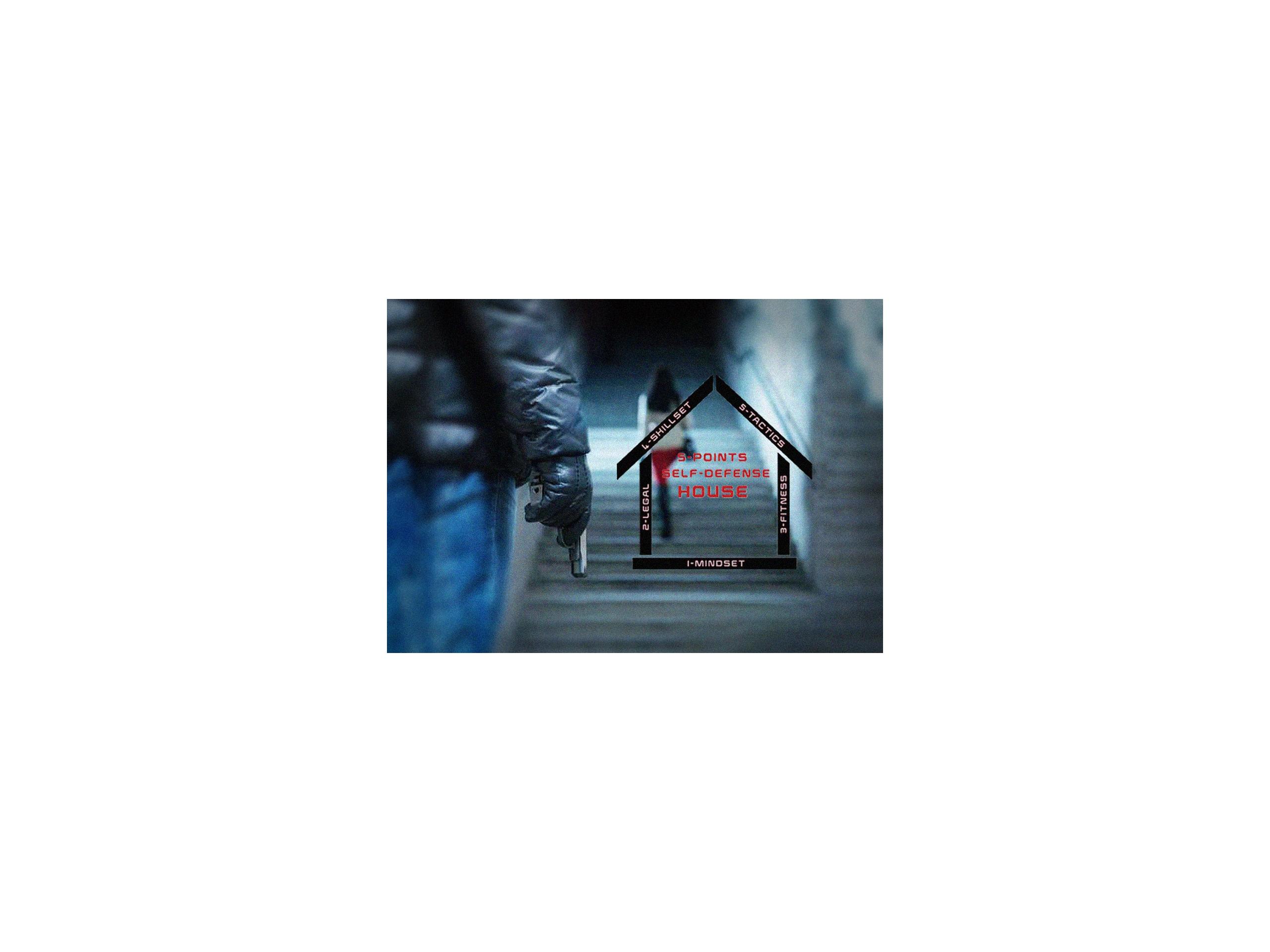 When it comes to civilian self-defense, whether it be with fists, firearms… baton or blade… there are 5 main points of consideration when building and preparing yourself, to prevent or defend a potential violent attack. Build a foundation for your self defense house. I refer to these as the 5 Points of Your Defensive House.  They are… The Foundation… the two Walls… and the 2 halves of the Roof.  I am using this simple house graphic above, to illustrate. I didn’t come from a Military or Law Enforcement background.  In fact, my initial experiences came from a verbally and physically abusive fist marriage. My past relationship with my ex resulted in my husband taking action and seeking training for me to be apart of, so that I no longer felt like I was walking around as a potential victim. My ex broke every law that my Stalking Injunctions, Protective Orders, and Restraining Orders were supposed enforce.  At one point, his rage and jealousy turned into him trying to kill me, and my 4 little children.  I found myself in a situation that was more real than anything I had ever read or trained for up to that point. It was something that seemed like a terror story that you would hear from someone else, but that you would never expect to have happen to you. After this and many other experiences, I understood that I needed to take control of mine and my family’s personal wellbeing and safety.  I signed up for and took a concealed carry class, but after the class, I found that I rarely carried.  I didn’t feel comfortable, in fact, I felt completely inadequate and intimidated.  After all, the instructor that taught the class filled the 4-hour time slot with the basics of our current state laws. But, he failed to share any experiences, stories, or additional in depth knowledge, with applicability as to how these laws could be used to protect myself and my loved ones. What about all of the other stuff I needed to know and understand? Such as the basics of shooting, moving, and what do I do, and how do I respond if another situation occurs? All of the how’s and what if’s of self-defense piled up in my head, overwhelmed me, and almost shut me down. Almost… Shortly after that my husband signed us up for a force-on-force Couple’s Safety course, and I met the instructor that I would then spend the next several years training, and learning the in’s and out’s of gun fighting with. Not just shooting, but actual gun fighting.  We are talking range time, classroom time, and real live force-on-force scenarios and training. I have been fortunate to train with some great individuals with serious experience (Colonel in Army Special Forces, Large City Police Chiefs, Veteran SWAT Leaders, Tier 1 Operators) Because of this type of training and the caliber of people I have had the ability to train with, I came up with the concept of the Self-Defensive House. The house differs somewhat from the traditional military/law enforcement Combat Triangle of Skills-Tactics-Mindset, which is what I was also taught, simply because, as civilians, we are not professionals in the industry.  It is not our “job” to protect.  We are the ones who are supposed to be protected.  So, as civilians, we are subject to a few more things that can sometimes be taken for granted, when compared to the professional soldier or law enforcement officer.

Here are the 5-Points of The Defensive House:

The Foundation:  Your Mindset

This has to be the foundation for your Defensive House.  Without the will to win and survive, none of the learning, concepts, or drills will ever really help you.  In fact, without a survival mindset, you probably won’t continue to seek any real education on the subject, let alone do any type of training in order to be prepared for such a violent act. In most cases, the will to survive will be the only difference between life and death.  As long as you refuse to give up, whether during the fight or after, you can survive the worst day of your life when yours or your loved ones lives hangs in the balance. It is developing a mindset of living your life more vigilant and aware than the average person, and being as aware of your surroundings as possible.

Vitally important for you to understand if you are ever faced with the potentiality to defend yourself, your loved ones or innocents.  Understanding the legal guidelines and ramifications of the situation you are faced with should govern your response or help you determine whether you should even respond at all. The phrase commonly repeated in Use of Force situations is, “It’s not the fight… it’s the fight ‘after’ the fight… that’s the real fight.”  The legal battle that will ensue after you defend yourself can really destroy your life. Generally, civilians are given more leeway in Use of Force situations compared to law enforcement; however, “Castle Doctrine” and “Stand Your Ground” statutes vary from state to state or may not exist at all.  Firearms or physical force may not be wholly supported in the state in which you live.  You need to understand the law, it’s applications, and understand it well.

Predators don’t prey on other Predators.  They prey on the weak.  They prey on individuals and situations that seem soft… easy targets.  Even the bad guys don’t want to get hurt.  They don’t want to “pick on someone their own size” so-to-speak.  Your physical fitness shows in your physical appearance. The way you’re built, walk, carry yourself, where your eyes are focused… all things that “harden the target” as is said in the industry.  The predator will often bypass the potential victim who walks confidently upright with their head up, not buried in their smart phone, scanning for possible danger in their environment.  In addition, your physical fitness will allow you the strength, endurance,  and finesse to be able to fight if need be. You will be able to harness the sudden surge of adrenaline and handle your heart rate jumping instantly to over 175 bpm.  You will be able to function effectively at that significantly elevated level.

1st Half of Roof: Skills

This includes your proficiency with weapons, medical, after action skills, etc.  Weapons include not only firearms and knives, but also personal weapons such as elbows, knees, grappling, sticks, rocks, or anything that can be used as an improvised weapon. Your skills with weapons and medical, whether applied to someone else or self-applied, are critical to defending yourself and changing the outcome to your advantage.  Firearms, knives, or martial arts skills are not something you learn once and they will always be there to aid you in your time of need.  These are highly perishable skills and need to be practiced and perfected throughout your life.  With regard to medical skills, recent wars have given way to numerous advances in life saving skills and products, which sometimes translate into the civilian world.  If your desire is to be truly prepared, then you will stay abreast of the best products on the market and best practices at a civilian level of skill.  In addition to weapons, Skills include your verbal skills as well.  Being able to use “verbal judo” skills to talk your way out of a situation or de-escalate a situation is a great skill to learn and perfect. Being able to communicate with your children, friends, and others surrounding you or involved in the situation can make the difference between who lives and who potentially dies. Have you developed and practiced “code” words with your family? Do they know what to do when the words are spoken to enhance their safety and give you the peace of mind while fighting so your attention is not divided between them and the threat at hand?  Just like fire drills at home, work, and school, you need to have and practice safety plans for interaction with the public.

2nd Half of Roof: Tactics

This applies to knowing the “How, When, Where” of the application of your Skills.  The “What To Do” when there’s an attack at the office, church, school, while you are getting gas, shopping at the store, etc.  Tactics helps you know “How” to best employ your skills. Tactics are your game plan for any given situation. It does no good to be proficient with a handgun and not know how to recognize positions of advantage, such as cover vs. concealment, or creating or avoiding potential chokepoints during an attack at work. Small groupings on your paper range target in a relaxed environment doesn’t equal where to move, how to take cover, where to take cover, how to move people to safety, how to avoid the bad guy, engage the bad guy, or where and when to engage if at all… etc, etc, etc.

Having provided a brief overview of the 5-Points of Your Defensive House, you need to realize that the metaphorical nails and glue of the house is training, what I call “R.E.A.L Training,” Real Environment Applications Learning. This type of training is what brings and keeps your Defensive House together, and that’s what ultimately keeps you safe and protected from the element that would do you and those you love harm.

Let’s build your Defensive House of bricks and not sticks or straw.  That way when the big bad wolf comes to the door, he doesn’t blow our house down and gobble us up.  We will Change the Outcome and the wolf will be, “What’s For Dinner.”
by Debi Earle
Posted in: News | Firearms Industry News Articles - Fresh from the firearms industry
0 comments
Comments
Leave your comment
Your email address will not be published